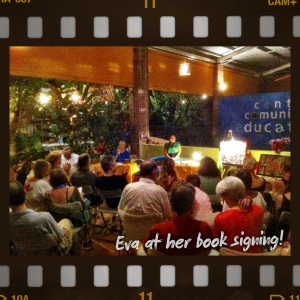 Eva writes a cookbook and many from San Pancho show up to wish her well. last night at entre amigos there was a gathering of folks who were there to celebrate Eva’s new book. She was all smiles and there was a story that went with the cooking classes that became the now printed cookbook. Eva’s son was heading to college and he didn’t have a computer, so Eva decided to open her restaurant for people to come and learn how to cook what she had learned during her entire life. She was overwhelmed with the number of folks that showed up. Just after the fourth week she had enough money to pay for her sons computer. That was such a great feeling that now she decided she should put out the cookbook to raise the money to get married. Now the classes are in full swing and the book is doing well, so soon I believe she will be walking down the isle. With the biggest smile on her beautiful face. She has a restaurant right around the corner from http://robertosbungalows.com and serves up some awesome food. Tell her Earl and Jane sent you.